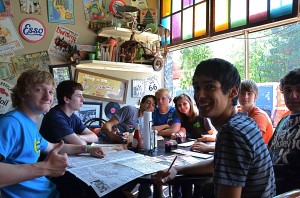 The Jasper school has an annual talent show every year where the proceeds from it go towards the 12th grade’s prom for the following year.   The unique twist to the fundraiser is that the class below the up and coming 12th grade is in charge of the entire show and raising of the money.  Cameron, our older son, being class president of the lower class was in charge of organizing, planning and putting together committees to make sure all went well.  A new idea that came up this year was to have local commercials shown at the talent show here and there throughout the show.   Being the class President’s mother, I was able to go around and help shoot the commercials and then later edit them. I thought you would enjoy one of my favorites… I’m not bias or anything.