It all started on Friday the 23rd, Flower’s milk had turned white and later that evening she started dripping milk on and off, a few times it would even stream out for a second or two.  I decided it was time to be on “official foal watch”.  I came home after listening to some great music at the Ranch and got my pillow, blanket and head lamp.  In the past Flower would have her foal at the house but this year with all the goats kidding her pen was occupied.  I pulled up the 15 passenger van in the hitching area (where we tie up the horses) and made camp.

I sat and watched her for quite some time – the moonlight was nice and bright so I could see her with out using any artificial light.  I only used the head lamp to look at her bag (if she were a cow it would be an udder) area to check milk leakage. Occasionally, I would go to my camp, the van, and take a hr nap.  This went on until 5:00 a.m. and I decided she was not going to have the foal.
The next day, Sat. the 24th, she seemed more restless, she didn’t seem to stay in one spot for very long.  That night we had more live music at the Ranch (the music was for the Waterfall Safari, an event for people who like to hike around and look at waterfalls). 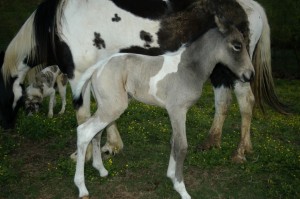 Although her pen is behind the barn and was away from all the activity you could still hear the music and people talking, dancing and laughing. I  wondered if that was holding things up for Flower.  Horses have a little bit of control of birth, it is a prey thing. 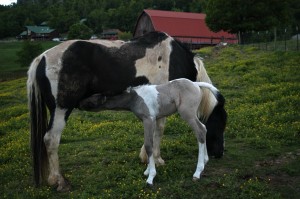 Around 1:30 a.m. everything seemed to settle down for the humans, as for the animals, they were all worked up.  Maybe it was the cool wind and the possible storms.  The horses were running around all over the ranch, which made the goat dogs excited so they started barking at them for getting too close to their goat herd, which then caused the ranch dogs to start barking. I know this because I was in my fancy camp, van, in the hitching area again.  Even Flower was excited, and ran around for a second in her pen. 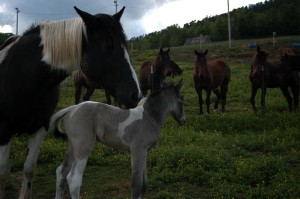 The other ranch horses keep crowding around the pen to look at her. It is pretty funny.

Finally around 2:45 a.m. they all started to calm down and get quiet.  Flower even quit walking around her pen and just stood at the bottom sleeping.  I thought, “Not again, no foal and I have stayed up another night for nothing.” But I just couldn’t quite give up just yet because now her milk was streaming out from time to to.   I decided to go sleep until 3:30.  I got up and checked Flower, nothing.  I went back to sleep and got up at 4:30… I told myself, “If nothing is happening I might as well go home and sleep in my own bed for a couple of hours before I have to get up for church.”

This time when I found Flower she was laying down. As I was watching her she would keep looking back at her belly, then after about 10 minutes her water broke.  She got up, walked around for a few minutes and then laid back down and had a filly at 4:54 a.m.  We have not named her yet, we want to get to know her a little better first.